HARDAGE: UNITY MUST BE PROTECTED AND TREASURED 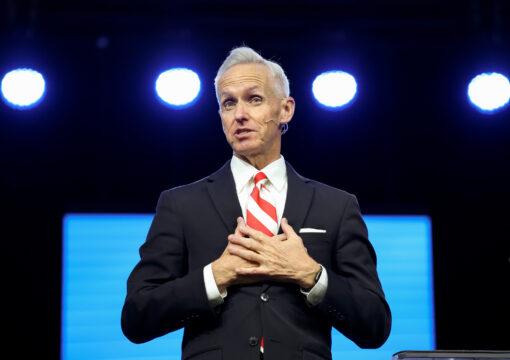 Hardage mentioned the successes of the Missionary Adoption Program (MAP) in connecting Texas Baptists churches with churches in other parts of the world to support ministry work in those areas. Birthed by a request from the Brazilian Baptist Convention seven years ago, the partnership has grown to support nearly 50 missionaries in Brazil and another 90 in other nations.

He noted two other strategic missions partnerships. Texas Baptists, working in partnership with the International Mission Board, is actively involved in South Asia. Hardage thanked churches for their faithful giving and support in reaching people there.

In Laredo, a new partnership with the North American Mission Board’s Send Relief is making an impact. One of the most unchurched cities, this border town has significant needs. The new ministry center will connect with and equip local churches to impact the community there. Hardage also noted the long-time impact River Ministry has had along the Texas/Mexico border.

Hardage then shared parting thoughts on the future of Texas Baptists. Quoting Psalm 106:35, Hardage noted that while there is a responsibility to influence the nations, there is also a warning not to let them influence the church negatively.

“We have been called to be a separate kind of people who love God and love others,” Hardage said.

Finally, Hardage shared his hope that Texas Baptists protect the unity and harmony the Convention enjoys. Calling it rare and a treasure, Hardage passionately urged churches to take up the responsibility to guard that unity.

“I’ve worked for 11 years to build bridges, make peace and be kingdom-focused. Not everyone wants peace, but we do. Never be divisive, but be a unifying voice every time you have an opportunity. There is too much at stake for us not to be,” he said.